The Northern Mariana Islands form a remote archipelago 2,500 kilometers southeast of Tokyo, perched on the precipice of the deepest point in the world, the Mariana Trench.

Tinian, one tiny island in this spectacularly beautiful region, played a critical role during World War II. The site of a program known as Project Alberta, Tinian was the top-secret assembly and launch point for the atomic bombs readied for use against the Japanese, two of which, Little Boy and Fat Man, made history when deployed on Hiroshima and Nagasaki in 1945.

But what isn’t well known is that the United States was prepared to drop more atomic bombs if the Japanese hadn’t surrendered. Tinian was positioned to be a veritable bomb factory, with equipment and scientists on hand to create dozens more Fat Man bombs. In the hasty transition from war to peace, it’s believed that much of this top-secret material was dumped in the waters around Tinian. 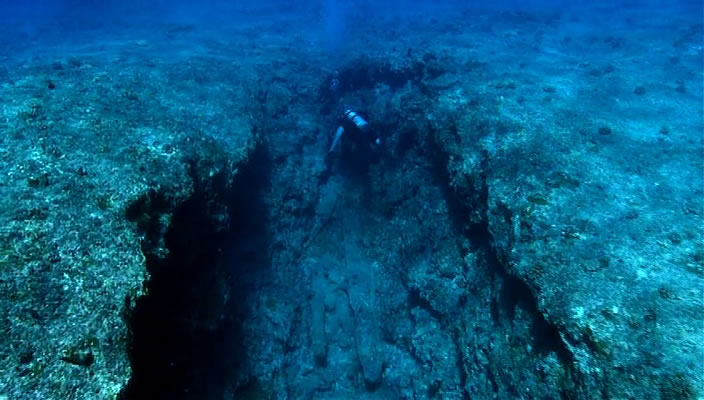 Any finds would be exceedingly rare. Today, cannons hundreds of years old are in museums the world over, but there is not a single one of these first-generation nuclear weapons on display anywhere, and holdings of even tiny first-generation bomb parts are scant.

But before they can find the bomb parts, the Detectives must determine where they may have been deposited. Tinian today is largely overgrown with weedy tangantangan, hiding much of what remains of the once thriving airfield. Their search takes them to Leon Smith, one of the few surviving Project Alberta scientists – and the man responsible for arming the atomic bombs. Smith provides them with key information that helps them track the dispersal of bomb material during the military clean-up.

The trail leads to a massive off-shore dumpsite, a veritable World War II museum beneath the crystal blue waters. The seafloor is scattered with unexploded ordnance and bomb parts that contain phosphorous, forcing the Dive Detectives to take special precautions. Unsuspecting local divers have pulled the coral-like material to the surface, where it can ignite in the air, burning at up to 800 degrees Celsius and causing serious injuries.